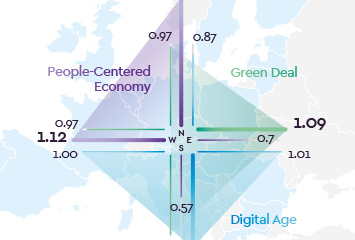 2019 saw a new set of leaders take over the direction of the European institutions. The European elections produced a very different political landscape, which could herald a new era in policymaking in Brussels.

In May 2019, more than 200 million European citizens (+8% compared to 2014) gave legitimacy to 705 Members of the European Parliament, almost two-third of which were newly elected. This higher turnout underlined EU citizens’ growing concerns over the economy, jobs and climate change. It also signalled their desire to have more say on “how the EU should be working in the future”.

The outcome is a hung parliament where the traditional centre-right (EPP) and -left (S&D) parties no longer jointly hold the majority. This fragmentation can lead to clever political manoeuvres after decades of two-party dominance. Indeed, majorities in the European Parliament will require the support of at least a third political force.

Meanwhile, in September 2019, President von der Leyen presented a “bold” policy agenda with 3 top priorities and clear milestones for her first 100-days in office. Among these, Margrethe Vestager was appointed Executive Vice President for a “Europe fit for the Digital Age”. At the same time, Valdis Dombrovskis became Executive Vice President for “an economy that works for the people.” Frans Timmermans took charge of the “European Green Deal” aimed at ramping up EU policy to fight climate change and push for more sustainability.

logos public affairs focused on the top 3 EU priorities – green deal, digital age and people-centred economy – of the Von der Leyen commission. The structure of the charts underlines the interinstitutional bargaining presiding over the European legislative process. For each institution – Commission, Parliament and Council (including its rotating presidency), the charts map #TheImplementers; i.e. the leading EU policymakers and officials that will have the ultimate responsibility to deliver the above mentioned EU priorities.

Building on these organisational charts, logos further compiled an infographic analysing how “balanced” the new EU leadership was in terms of gender, geography and politics. In a much more political game, will the gender, geographic origin or political orientation of the #TheImplementers become factors that shape their ability to pass legislation?

In May 2019, the European elections led to a hung parliament where the centre-right (EPP) and centre-left (S&D) parties no longer jointly hold the majority. It has opened a new era for EU policymaking after decades of two-party dominance. #TheImplementers chart shows the political affiliation of the decision-makers working for the Commission or the Parliament. The graph does not take Commission staff into account as they are obliged to be independent and impartial. 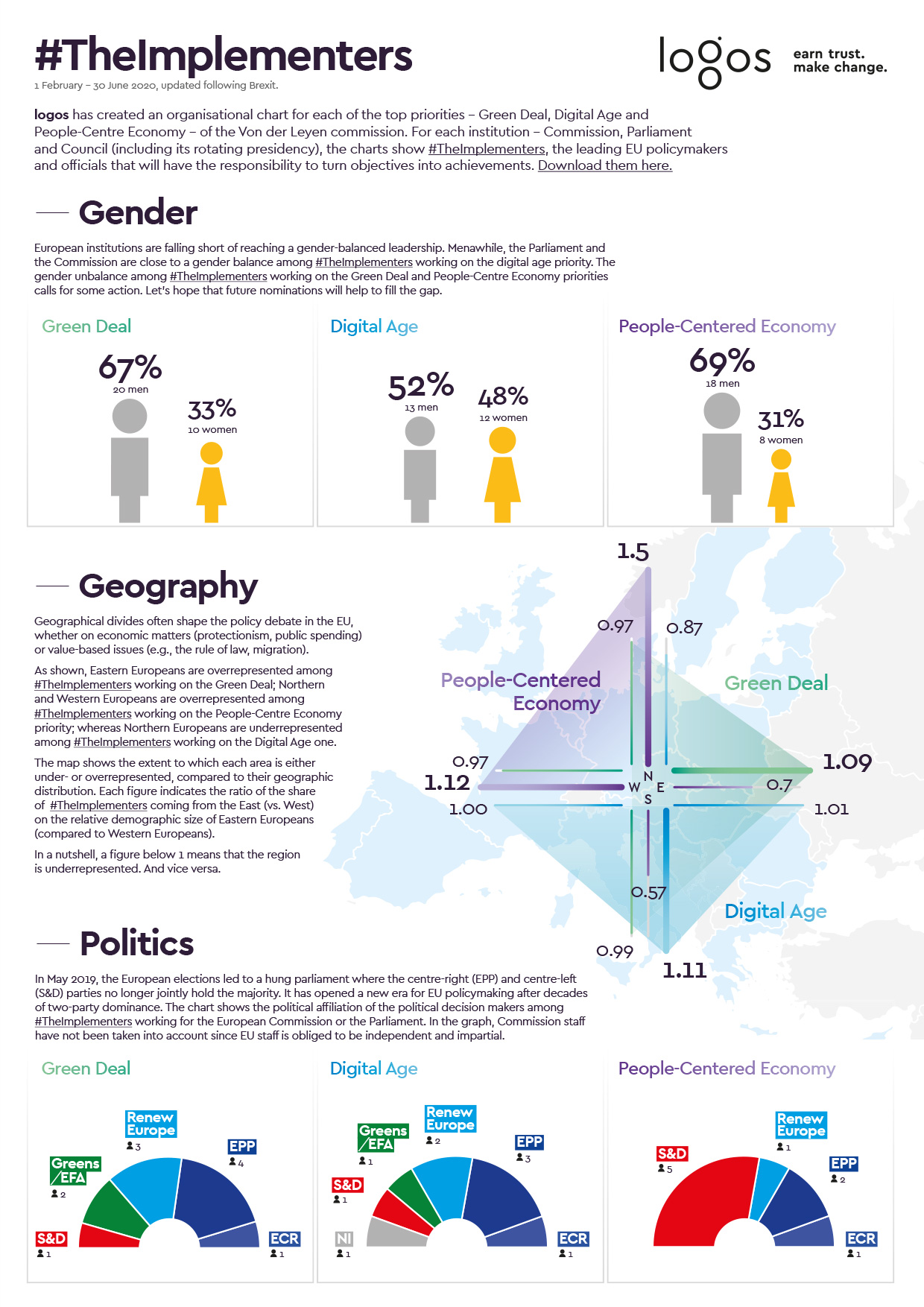 The map shows the how well east, West, North and South are represented in relation to their demographic weight. Each figure indicates the ratio of the share of #TheImplementers coming from the East on the share of Eastern Europeans in the European Union. In a nutshell, a figure below 1 means that the region is underrepresented. And vice versa.

logos will update this infographic every six months to take into account the changes associated with the rotating presidency of the European Union. The current infographic includes the members of the Croatian government. It also takes into account the consequences of Brexit. On 31 January at midnight, the United Kingdom left the European Union, leading to the departure of British officials from their posts in the European institutions. Stay tuned on Twitter for future updates @logos_pa!